The 3 x VR films, within the ECOSPHERE App, are telling the Our Planet narratives through both wildlife footage and through people on the ground, who are putting conservation solutions into practice.
“Immerse yourself in the wildest places on earth and discover how humans are working together to protect our most precious wildlife. Explore the great savannahs of Kenya, discover the ancient jungles of Borneo and dive into the rich coral reefs of Raja Ampat. Encounter elephants, orangutans, manta rays and some incredible humans, all in stunning cinematic Virtual Reality (VR).”

It was filmed on specially made cameras of which there are only 4 in existence, and Oculus let Silverback put 2 of them in touching distance of elephants and orang-utans! 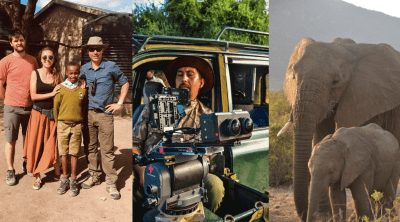