Skip to content
Our Shows
Dancing with the Birds

Dancing with the Birds

“A Superb Bird-of-Paradise calls for a mate. Pursuit of love is his life’s work but looking good is only half the story.”

So begins our journey deep into the forest, following the glorious colours and curiosities of rarely seen birds-of-paradise, bowerbirds and manakins as they show off in spectacular fashion in their search for a mate – much of which has never been filmed before. The film carries its own pedigree, narrated by the Emmy Award-winning Stephen Fry, who guides the viewer through this charming and playful documentary, suitable for all the family.

From a nod to renowned bird illustrator Charley Harper in the opening titles, we are transported deep into the tropical forest to meet the varied and vivacious members of this remarkable set of dancing birds. Grouped by courtship behaviour we begin with the swinger, the King of Saxony, so called for his ability to swing on a vine to encourage a mate with an elaborate flick of his head feathers, which happen to be the longest head feathers of any bird in the world. From there swoops in the Black Sicklebill, one of a few pole dancers, balancing precariously on a tall, thin tree stump, with shoulder plumes to die for. With a dash of innuendo from our intrepid narrator, there’s more dancing on the pole, this time from the gyrating twelve-wired bird-of-paradise, before we are introduced to ever-more extravagant groups; the artists – Macgregor’s bowerbird, who builds the most ambitious construction made by any single animal and has an astonishing, and other-worldly, skill at mimicry; and the Flame bowerbird, the most brightly coloured bird in the world, who courts his female with a dance like a matador; then there are the teamsters – the lance tailed manakins who perform their tight aerial manoeuvres as a pair and the cock of the rock who favour group courtship. Finally, the pièce de résistance, the greatest showman, otherwise known as the Carola’s Parotia, whose dancing would rival Hugh Jackman’s any day. The forest is not exempt from petty rivalry and jealousy however, as mischievous tactics are at play among the birds to ensure their bright plumes get spotted by the requisite female of the species.

From press-ups paradise-bird style, to the bird species that can mimic snuffling pigs, Dancing with the Birds will entrance viewers with a delightful hour of nature at its most wondrous. 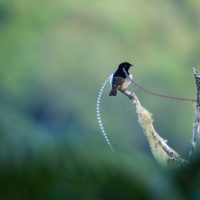 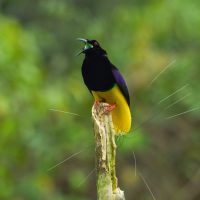 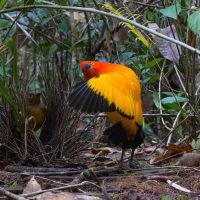 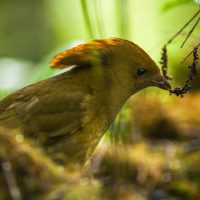